Contact us for more information or to make an appointment

What can a Lip wax do for you?

Waxing is a depilatory hair removal method where hair is removed from the follicular roots for longer lasting results.

How does it work?

The therapist will clean your upper lip area, after cleansing a pre epilation oil is put on before the wax. No strip is put over hard wax because it becomes a strip in itself. When hardened, it’s ripped off quickly. Your first wax will probably hurt a bit, but will get better each time.

How long does waxing last?

Usually, when wax is removed from the lip surface, it will cling on to the hairs leaving your skin smooth for a few weeks (approximately 4 – 6 weeks).

Will hair regrow after lip waxing?

After lip waxing, hair will grow after some time. Hair regrowth is expected after at least three weeks after waxing. In some cases, regrowth can occur after 6-8 weeks. Hair which grows after you have your lips waxed is softer. However, hair will grow back thinly compared to what you had initially.

What are the different forms of waxing?

Usually, you can opt for a hard wax or strip wax depending on the area you don’t need the unwanted hair. With lip waxing, hard waxing is more of a choice for many people because of the sensitivity of the lip areas.Hard wax is applied thickly whereas strip wax is done thinly. (Hard wax is good for a smaller area). This can also be used on eyebrows, underarms and bikini area. 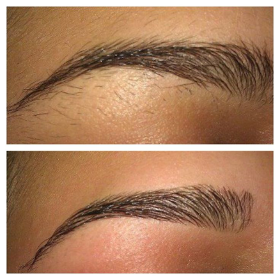 What can a Brow wax do for you?

The Benefit brow wax is the quickest way to not only flatter but flaunt your favorite features. Whether you’re searching for eye-opening arches or a little extra lift in your overall look, the results from this service will leave you looking polished, pretty and put-together.

How does it work?

Always advise your therapist on what shape you would like, you should give them the most information you can.

If needed, your brows will be trimmed with scissors. This helps hair to stay in place and not wander out of the shape. It also is one of the steps that allows women to get ultra-defined brows.

The excess bulk that’s removed makes for a much cleaner look. Scissors are used free when combing hair up and trimming above the brow. However, if they are trimming at the main shape of the brow, the scissors are placed over a comb so that the hair is even and there are no chances of bald spots.

The therapist will clean your eyebrow area, after cleansing a pre epilation oil is put on before the wax. No strip is put over hard wax because it becomes a strip in itself. When hardened, it’s ripped off quickly. Your first wax will probably hurt a bit, but will get better each time. The hair underneath, in the middle of brows and on top (if you wish) will be removed.

Why do people say that eyebrows are so important for beauty?

Eyebrows help frame the face, drawing attention not only to the eyes but to the bone structure as well. When done correctly, eyebrows can draw attention to positive features and away from negative ones. Also, eyebrows should be different sizes and shapes based on the shape and size of the face.

Do men get their eyebrows shaped? Would I be the only man in the salon?

Yes, they do. In our current neighbourhood, 80% of our customers are women and 10% are men.,. We love our male clients!

How Long Will The Redness Last?

Depending on your skin type, anywhere from an hour to six hours is considered normal.